Perhaps someone among those who never practiced them, may misunderstand Pilates and Yoga. Many people tend to associate these two disciplines. After all it’s true that Joseph Pilates (the man who created this world-known method) studied yoga and borrowed a great deal of hints from this millennial science, although there is more than one aspect that set them apart. First of all, the mood that inspires them: whereas Pilates is a method that privilege strength and control, Yoga is based on creativity and freedom to express through the body, focusing on spiritual issues. Whereas many yoga asanas improve flexibility,  Pilates focus is on the stability in the joints and the strength in the muscles.

If you are a Yoga enthusiast as we are, perhaps you should know that you can benefit a lot from the practice of Pilates (as well as the opposite).  Matching  these two practices is a good idea to prevent injury and to feel a greater sense of well-being!

So let’s see how Pilates can enrich our yoga practice.

One of the greatest Pilates’ insight is about the core, more exactly what mr. Pilates called powerhouse, the place from where all the strength derives,the body’s center of gravity. The abs, sure, but not only abs: the powerhouse includeslower back, buttocks and pelvic floor. Some muscles help us to stabilize our posture, others concur to most of the movements we do every day, giving them strenght and dynamism. Pilates gave a so great importance to powerhouse that he based on it the second of his method’s principles: all the Pilates exercises start with the activation of the powerhouse. A powerful core gives a greater control over movements,helps to hold balance with more ease, and prevents unnecessary strain on the joints. In yoga a well-engaged core helps in keeping with ease some trickier poses and can also give us a better stretch for our muscles.

Yoga was a source of inspiration for Joseph Pilates. As an asthmatic child he had to struggle all his youth to overcome his disease. It’s said that he approached yoga to learn more about breathwork and, later, developed a theory of his own: he believed that the bottom of the lungs was a repository for infection and germs, and that a deep exhalation could help to cleanse toxins. So, what to do to empty our lungs?  The concept of core turns to be useful even in this case: engaging abdominal muscles, it’s easier to exhale all the remaining air from the lungs and purify them.

There is no Pilates without alignement. What does it mean? It means that our body is built in such a way that every bone and every joint should connect to the others just in one way. When we move we should respect what Mother Nature created in so a perfect way and that’s what Pilates teaches to its practicioners to develop a balance all along the body and the muscles. In yoga, alignment happens to be misunderstood to the detriment of bones and joints health. So what we achieve with Pilates is very useful to trasform our yoga practice 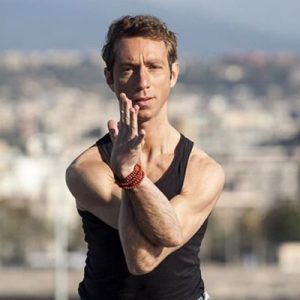 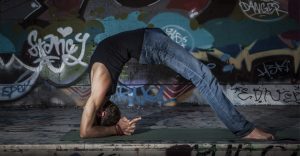 Enzo has a degree in Sciences of physical activities and sports with honors with a thesis on Pilates and Yoga in the treatment of low back pain. Since adolescent has begun to explore the infinite potential of yoga, then as now fascinated by those activities that go beyond the physical effort to intrude into the pleasure of a mind centered and a spirit satisfied. These were the years when his journey began training in ju-jitsu, rules in master 2* Dan and with whom he won the most coveted national and international titles in the specialty randori couples. This specialty has enabled him to perform all over Italy and in much of Europe coming in contact with world-renowned masters: It ranked in first place at the World Championships UNJJ. of 1998 in Spain, He got the third place at the World Championships WKF. of 1999 Austria and did an encore in France 2000.

Over the years, Enzo has expanded his knowledge by practicing karate, aikido, and shiatsu, after, with Pilates becoming certified teacher Polestar Pilates, international school based in the United States recognized by the PMA. (Pilates Method Alliance). During several trips to California he has experienced different styles of yoga that have guided his practice until the meeting with dazzling Sensei Roberto Milletti,,it,ore e membro dell’Education team,,en,”Odaka Yoga – says Enzo – is a style that suits the practitioner and not vice versa,,it,After working as a technical director in various fitness centers,,it,Yoga and is dedicated to the training of teachers in the field mindbody,,it,founder,,it,Mat You Can,,en,a,,es,online lessons platform of yoga and Pilates,,it,that allows you to practice from home in comfort,,it,choosing the duration and objectives of the lesson and is a great tool for teachers who want to keep constantly updated,,it, founder of Odaka Yoga, where he became a certified teacher 500 ore e membro dell’Education team. “Odaka Yoga – dice Enzo – è uno stile che si adatta al praticante e non viceversa: as the water conforms to the shape of its container, Odaka Yoga suits mode of expression of those who practice. Odaka consider a synthesis of my past experiences to the deep connection between that recreates the yogic philosophy and that of the warrior, typical of martial arts “.