Pujya Swamiji receives prestigious Ahimsa award by Parliament of World Religions TORONTO: Today was a moment of historic pride for India when Pujya Swami Chidanand Saraswatiji was awarded the special Ahimsa award by the Parliament of World Religions in Toronto. This evening, Dr. Robert P. Sellers, Chair of Parliament of World Religions, Dr Kirit Daftary, Trustee and representative of the Jain religion, Parliament of World Religions, honoured HH Pujya Swami Chidanand Saraswatiji – Muniji for his exceptional contributions that enhance and strengthen the interfaith community through non-violence, his unparalleled service to humanity, his great example of peace and compassion in action. The award has been sponsored by Jain communities around the world. H.H. Swami Chidanand Saraswatiji, one of India’s most renowned leaders, is President of Parmarth Niketan, one of India’s largest interfaith spiritual institutions and co-founder of Global Interfaith WASH Alliance, the first alliance of religious leaders working for water, sanitation and hygiene, launched by UNICEF at their World Headquarters in New York City during the time of the General Assembly of the United Nations,. He also is founder of Ganga Action Parivar, supporting and dedicated to the Clean Ganga Movement, Divine Shakti Foundation, educating and empowering women and girls, and India Heritage Research Foundation, which conceived and published the historic Encyclopedia of Hinduism and built three historic ashrams in the sacred land of Kailash Mansarovar . The Parliament of Religions, founded in 1893 when Swami Vivekananda came and delivered his historic address has gathered approximately 10,000 people from 50 different religious lineages and from 80 regions of the world at the Toronto Metro Convention center for their 7th Parliament. Sadhvi Bhagawati Saraswati, President of Divine Shakti Foundation and Secretary-General of Global Interfaith WASH Alliance, disciple of Pujya Swamiji’s spoke about Pujya Swamiji as an embodiment of Ahimsa. She said, “Ahimsa is not simply an absence of violence. It is a fullness of peace, a fullness of embracing and acting from the truth of our highest united humanity. Pujya Swamiji sees not only bombs, guns and armed conflict as violence. He also sees starving children, homeless orphans, women without access to clean water or toilets, death by diarrhea, polluted rivers and felled trees as violence. His life has been dedicated to eradicating all forms of violence, not only armed conflict, but also universal access to safe and sufficient water, access to health care and education. Wherever Pujya Swamiji goes He embodies ahimsa, whether picking up trash on the banks of a river or picking up people’s spirits, whether building schools, women’s centers, hospitals and sewage treatment plants or building bridges between people in conflict. 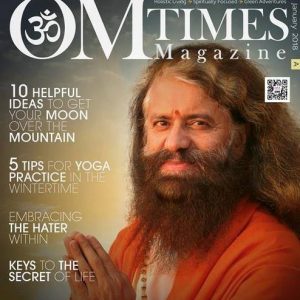 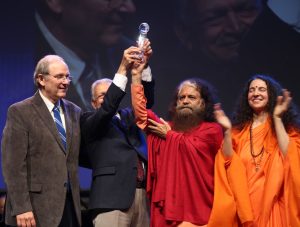 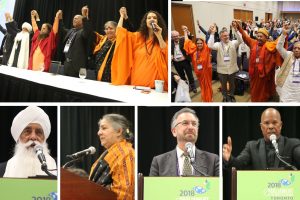 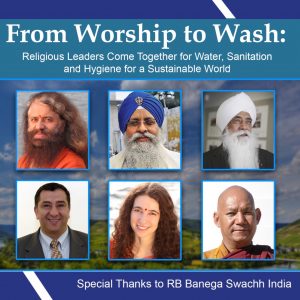