For the ancient Indians the celestial sphere was divided into 27 sectors or ‘Houses of the Moon’, called naksatra, literally stars or pearls.  Thirteen rays2 originate from each ‘House of the Moon’ and reach the earth. Four of these, perceivable as ‘light-sound’ are distinguished by the syllables A, I, U, E, O, BA, BI,  BU, BE, BO etc.

In total  there are 27×4=108 light-sounds corresponding to 108 building blocks of Matter. 108, like the grains of Mala, or like the elements indicated by the chemist Dmitrij Ivanovic Mendeleev in the Periodic Table of the Elements3, or by rsi Kasyapa4 at least 3,000 years before (or so they say).

To these 108 perceivable rays another 252 must be added, for a total of 360 rays, one for each degree of the celestial sphere. The theory of the Indian poets5 is fascinating: the radiance of the stars, in Sanskrit, marici, not only brings life to earth and to all the undefined parallel worlds that form the Universe of Veda, but has the power in certain, specific conditions to increase the frequency of the vibrations in our cells favoring those levels of consciousness which are defined as Realization, Illumination, Liberation…

In human beings all these 360 rays are present: those which illuminate the cosmos, those which give life to matter and those from which thoughts, desires and emotions arise.

These rays are to be found ready to respond to the ‘Song of the Stars’, in the six fundamental Cakra of Yoga (perineum, genitalia, navel, heart, throat, the center of the eyebrows):

62 to the Svadhisthana Cakra, navel plexus;

54 to the Anahata Cakra, heart plexus;

72 to the Visuddha Cakra, throat plexus; 64 to the ajna Cakra, forehead plexus.

At the moment of creation, the ‘Goddess of Dawn,, called ‘Marici’ by the Buddists, or ‘The One Who Radiates’, lets fall the ‘Seeds of Light’ (or of sound or light-sound) into the depth of our soul. After having practiced Yoga, through a particularly emotional state or by fluke, we become sensitive to the ‘Song of the Stars’. The ‘Seeds of Light’ germinate and ‘the Cosmos alights inside us’.

Like harp strings, caressed by the wind, they create unexpected melodies so that our internal organs, bones and our cells harmonize with the voice of the Cosmos, sharing the Harmony of the Spheres. It is from the Seeds of Light that the Interior Universe blossoms.

For the ancient Vedas, inside each human being there sleeps an entire Universe with planets, stars and galaxies. See, eg, “Uttara Gita – or The Initiation of Arjuna by Sri Krishna into Yoga and Jnana” English Translation and Notes by B.K. Laheri, F.T.S. –

Madras, India 1933 – Cap. II,15-16:  “15. Susumnã is a fine nerve that passes between the Idã and Pingalã. From this Susumnã all the JnãnaNãdis (sensory nerves) take their birth: hence it is called the Jnãna- Nãdi. 16. The Sun, the Moon, and the other Devatas, the fourteen Lokas of Bhur, Bhuvar, etc., the ten directions, East, West, etc., the sacred places, the seven oceans, the Himãlaya and other mountains, the seven Islands of Jambu, etc., the seven sacred rivers, Gangã, etc., the four Vedas, all the sacred philosophies, the sixteen vowels and twenty-four consonants, the Gãyatri and other sacred Mantras, the eighteen Purãnas and all the Upa- Purãnas included, the three Gunas, Mahat itself, the root of the Jîvas, the Jîvas and their Atman, the ten breaths, the whole world, in fact, consisting of all these, exists in the Susumnã.”

The Song of the Stars awakes this universe, changing each gesture into a cosmic dance and each thought into an astral voyage.

A poetic metaphor? Maybe not. Recently it has been discovered that ‘astrocytes’, star shaped cells (hence their name) that form from 20-50% of the cerebral mass, and the microtubules, the supporting structure of the cells, communicate between each other, and create specific processes.

The neuronal microtubules, when stimulated by certain vibrational frequencies (sounds), produce energy in the form of light and heat. Energy that would be able to modify DNA.

In their turn, the astrocytes, which don’t communicate by electric impulses but through light, activated by the energy of the microtubules, start to regenerate nerve tissue by creating new neurons and therefore new synapses.

With this in mind, Yoga is the ‘Art of Vibration’. The aim of Asana, Mudra and Mantra is to make the energy of the stars vibrate in the body.

If this vibration stimulates the production of light energy in the microtubules, and energy that enables the astrocytes to generate new neurons, then the so-called illumination  would be none other than the contemporary activation of all the neuronal microtubules and consequently the stimulation of all the astrocytes that Yoga leads to cell regeneration and to the modification of DNA as suggested by some, is a fascinating hypothesis, but like all hypotheses it must be verified.

If you think of the disproportion between the number of people who practice Yoga (30 million in the USA alone) and the number of known cases of physical transformation or unexplained healing linked to the practice of Yoga, it leads us to think that it is just a hypothesis, fascinating but farfetched.

Moreover, the stars light everyone in the same way: in which way or for what reason are some people able to use this light whilst the majority of human beings cannot?

THE STARS INSIDE US

In forty-five years of practice and research I am convinced that in Yoga one has to go beyond the metaphor.

One must in many cases, if not in all, take the ancient teachings literally.

Speaking of illumination for example, many of us automatically think of the poetic description of a particular condition of the mind or a particular state of consciousness. But what if it is really a phenomenal explosion of light? If in fact it is the perception of stars that dwell in us? I have discovered that the asana are constellations, asterisms that are purely casual.

A few years ago whilst making a teaching video I was consulting Google to find images for Yoga positions that are named after birds.

I typed in ‘Peacock, Crow, Swan, Crane, Dove…’ and images of the Milky Way came up. This intrigued me and I looked for the names of the basic positions in the Indian texts on astronomy. And indeed, all the asana that I know, from Trikonasana (the triangle position), to Mandukasana (the frog position), from Garudasana (the eagle position) to the position of Natarajasana, all correspond to stars, constellations or asterisms.

The asana are celestial bodies and phenomena and the traditional pathways are maps of the sky, maybe routes of ancient mariners. Apart from the eventual practical aspects it is however beautiful! Each time we assume a series of positions we are recounting the story of a voyage.

With its astral links Yoga reveals itself as a sacred dance that lets us live physically, that link between person (Microcosm) and Universe (Macrocosm). We often use this as a metaphor, this state of consciousness or poetic attempts to overcome our anxiety of incompleteness. Marvelous!

The identicalness between asana and the stars is the key to understanding the real sense of Yoga: the discovery of our celestial origin and the transformation of body and mind together. I said cellular regeneration, and DNA modification. Science fiction?

The Tamil’s Nath and Siddha, the creators of Hathayoga, have always spoken of this. Tirumular (known as Cuntaranatar) in the Tirumantiram7  (a book of 3,000 verses which narrates the deeds of the first siddha, Nandi, Patanjali, Vyaghrapada etc.) affirms to be at least 3,000 years old and Babaji di Hairakhan, who died in 1984, was Babaji Nagaraji, recorded in the annals of thousands of years ago.

Legends? Based on my experience with the Rishikesh series, on my research and on the documents furnished by Rupchand, one of Babaji Hairakhan’s well-known pupils, I am of the opinion that Hatha Yoga is something different from what is generally believed. Behind the accounts of paranormal phenomena there is more than just the desire to astound which animates many of its devoted disciples. ‘Tirumantiram’ – ITES Publications, Madras 1979.

THE DANCE OF THE GODS

Let’s imagine that there are really stars inside us and that millions of years ago our forefathers discovered a way to make them play by the ‘Music of the Celestial Spheres’.

Let’s also imagine that these stars inside us are those astrocytes that are currently being studied by Prof. Fred H. Gage’s team in California. (Salk Institute for Biological Studies). Astrocytes are sensitive to light and today we know that stimulating the neuronal microtubules with  sound vibrations the brain illuminates with its own light. (see: Stuart Hameroff, Roger Penrose. Consciousness in the Universe, Physics of Life Reviews, 2013).

Is it so absurd to think that it is possible to stimulate the neuronal microtubules and therefore the astrocytes, with sounds and vibrations produced by the Yogin? Not according to me, and I believe that there is a way of proving it.

First of all with the asana and the sequence of movements one must soften and in a sense expand the body.The voice must travel, between muscles, skin and bone, without obstacles, like the breeze on the ocean, slipping through the dozens of fissures, cavities and channels that are found in our cranium, to make the bones vibrate and to finally arrive at the cerebral mass.

With practice, every single part of the head can vibrate producing high frequency sounds called Overtones based on the theory of Overtone Singing.

Paying attention to this sensation, after a short time, an interior sound begins, a sort of pleasant insect’s chirrup that is neither linked to the heartbeat nor to the flow of breathing.

It is as if the brain starts to sing by itself. Often, light phenomena are linked to this chirruping, with flowers of light that form and disappear, following this rhythm.  Once one has become confident with this internal sound, the quality of work on the asana changes radically. The movement is softer, lighter and beneath the skin one is aware of a sort of effervescence (perhaps the divine caress that the tantric refer to, see the ‘Paratrisikavivarana’ by

Abhinavagupta). This condition, finding the alignment with the constellations and thinking that each articulation corresponds to a celestial body, is an experience that is well worth trying. The song of the stars sounds in each single cell, and the body cannot do anything other than dance. This is Yoga: a dance, ‘the Dance of the Gods’.(translated by Christine Elizabeth Hogan) 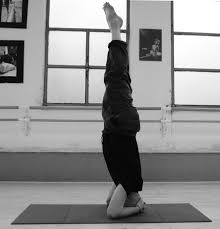